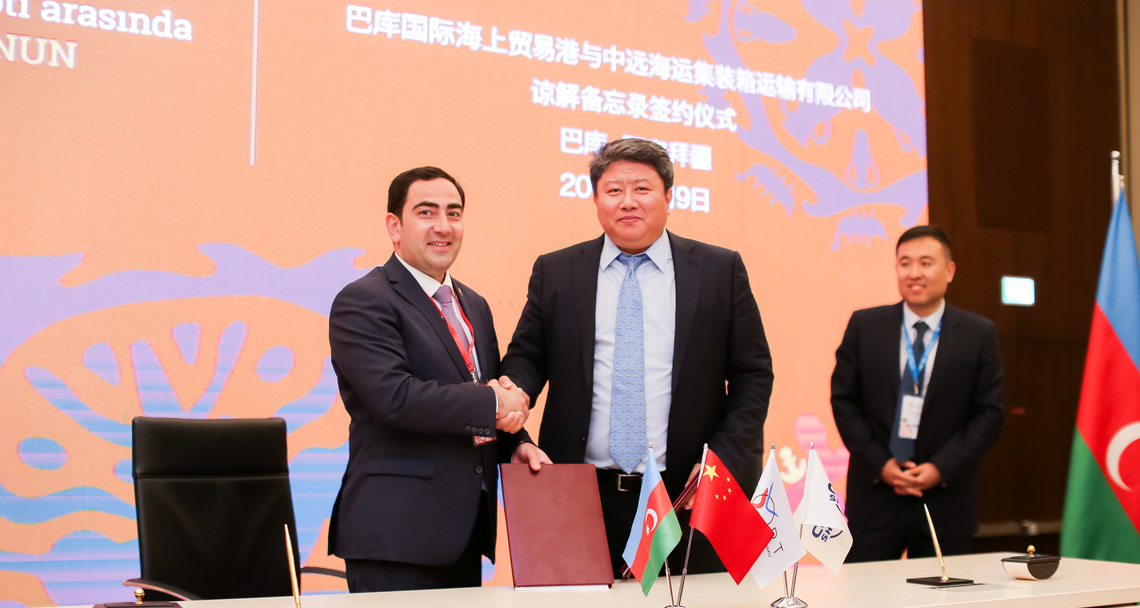 World Ports of Conference (IAPH Baku 2018) was held at the Baku Congress Center on May 9-10.

According to AZERTAG, Speaking at the opening of the conference, Santiago Garcia, President of the International Association of Ports and Harbors (IAPH), said Mila was located in the center of the ancient Silk Road in Baku. He said holding of the conference in this city was not accidental. The Baku conference is also the first event organized by the International Ports Association in this region.

He noted the importance of the conference in terms of promotion of transport and logistics opportunities of Azerbaijan.

Sultan Ahmed bin Sulaim, chairman and CEO of “DP World” Companies Group, said the Baku Harbor is a great host for the World Conference of Ports. Holding this event in Baku is an important event. Important steps taken by Azerbaijan in the field of logistics, implemented international projects, significant works done in the port of Baku show the significance of  holding this event in Baku: "The World Conference of Ports held in Baku is an important platform for the development of relations among the ports. The leaders and representatives of the world's ports participating in this event can discuss and collaborate on future activities. "

Speaking at the conference, Ramin Guluzade- Minister of Transport, Communications and High Technologies noted the importance of holding this prestigious event in Baku, and said  that holding og this conference hosted by major port cities such as Sydney, Los Angeles, Hamburg, Panama, Bali and others in baku city in 2018  was a significant event for our country: "Restoration of the historical Silk Way with the initiative of the Great Leader Heydar Aliyev has created a basis for the expansion of Azerbaijan's transit potential. Transportation and logistics is one of the most dynamically developing areas in the world. This area also is a priority in our country and it is kept in the spotlight by President Ilham Aliyev. Today, Azerbaijan is both an initiator and a participant in a number of major international transport projects. As a result of the purposeful policy conducted by the country's leadership, Azerbaijan has become a key transportation hub in the region. These works play an important role in increasing the importance of Azerbaijan as a transit country. "

Minister said that Azerbaijan is building a sustainable transport system based on innovative technologies. In order to increase the competitiveness of the existing transportation complex, necessary reforms are being carried out in this area, and management is improved. New Baku International Sea Trade Port has been built in Alat settlement for the purpose of increasing the volume of cargo acceptance transportation in the country. "In order to create modern transport infrastructure, which has a special role in the development of economy, especially in the non-oil sector, and expand international transportation corridors opportunities, several works have been carried out. All this brings huge economic dividends to Azerbaijan and its partners, and increases the strategic importance of the region. "

R. Guluzade noted that thanks to the great advantage of the area, the new port will enable Azerbaijan to successfully solve traffic safety problems and turn Baku into a very modern and large transport and logistics center in the Caspian Basin. Also, the new port creates favorable conditions for expanding cooperation among the Caspian littoral states and the full operation of the North-South and East-West transport corridors: "From the end of 2018, cargo carriers will be able to observe the place of cargos and time of delivering to ports through in online regime through modern information communication systems of new Baku Port. Baku Port is developed as Green Harbor and logistics center. Here, the latest technology and environmental standards are applied in line with the EU's new strategy on environmental, economic and social security. For this purpose, devices for cleaning oil and domestic waste water from the Caspian basin have been installed at the new port of Baku. "

He said that the Alat Free Economic Zone serves the transformation of Azerbaijan into the region's transport and logistics center. This zone enhances the role of the new port of Baku for the states such as Europe, Middle East, Central Asia, Turkey, China, Russia and Iran. "Another project, which will further enhance the importance of the new port as a regional transport hub, is the Baku-Tbilisi-Kars railway. Baku-Tbilisi-Kars railway and New Port Complex will create favorable conditions for transportation of cargo from China and Central Asia to Europe and back in the future"

R. Guluzade also informed about Trans-Caspian International Transport Route and “North-South” international transport corridor. He said that after the completion of the works in these transport corridors, the trains will be able to move from the Indian Ocean basin to Central Europe through Northern Europe, as well as Baku-Tbilisi-Kars railway passing from the territory of Turkey and at the same time through Eastern and Central Europe and also via ferry over the new port . These projects will contribute to the revival of the Silk Road, the creation of more efficient transport links in the region, and to increase transit cargoes across the Europe-Caucasus-Asia transport corridor.

European Union Commissioner Johannnes Khan expressed his regret that he couldn’t attent the conference at the World Conference of Ports held in Baku, but expressed his pleasure in sending a video message to this important regional event. He congratulated Ilham Aliyev on re-election of the President of Azerbaijan.

Yohannes Khan said Azerbaijan plays a very important role in uniting Europe and Asia. The European Union will continue its support for the port of Baku on the international logistics and trade hub. Links are one of the top 20 goals for 2020.

“We have confirm in the Eastern Partnership Summit held in November last year that was an important factor in economic development and bringing people closer together, creating societies more powerful and creating opportunities for sharing experiences. At the summit, the European Union said it would support a major trans-European Transport (TEN-T) network up to 2020 with a grant worth € 150 million, and will support the implementation of a long-term investment plan that would invest more than one billion euros. We also support the necessary legal and institutional reforms that build upon the technical assistance plans, the safe, environmentally friendly and market-driven transport system. We invest in important infrastructure projects through close cooperation with international financial institutions such as the European Bank for Reconstruction and Development (EBRD) and European Investment Bank (EIB). The mechanism of a new foreign investment plan plays an important role in directing private sector investments, "he said.

The European Commissar welcomed the agenda of the event, focusing on topics such as gender, multiculturalism and logistics. "European Union has always paid attention to present real results to our citizens within the framework of 20 goals for 2020. With the promotion of entrepreneurship and innovation, human capital and people's participation are crucial to benefit from opportunities of transport cooperation. It's an important year for getting the results as in 2018 year, and I'm ready to work closer cooperation in the field of communications, "he said.

Also it was held an exhibition in Baku Convention Center within IAPH Baku 2018. Executive Director of the International Ports Association Patrick Verhoven, General Director of "Baku International Sea Trade Port" CJSC Taleh Ziyadov and other participants of the conference got acquainted with the exhibition.

The organizers of the conference offered their products and services at the exhibition. There is also a detailed information about the Silk Road and the North-South, East-West transport corridors and the giant ports of the world. China's Quancou city which will host Word Port conference next year and “Port of Guangzhou” stands hosted were also welcomed by the exhibition participants. The stands of "ADY Express", "Azerbaijan Caspian Sea Shipping Company" (ACSSC) were also in the focus of attention of representatives of international organizations, port managers, experts specialized in the field of transport and logistics.

AXDG has informed the interested parties about the services, it has been distrubed booklets to participants. A special video about activities of the ACSSC was demonstrated to the participants. The visitors were also informed about the history of the Caspian Sea Shipping Company, which commenmorated its 160th anniversary this year. Representatives of the company also held productive meetings with potential customers within the framework of the exhibition.

The World Ports Conference continued with various sessions and workshops on May 10. "How is the competition center formed? Professor Teo Teotetom from Shanghai University, formerly Chief Executive Officer of “Dubai Logistics City” Michael Profitt, President of the Triyest Port of Italy Zeno d` Agostino and others  talked about the importance of regional habs and  Free Trade Zones at the session called “Free Trade Zones act as a key player in international trade and value chain”.

The discussions were focused on the prospects of transportation into regional habs using the unique capabilities of the Baku International Sea Trade Port and its location at the intersection of its trade routes and routes.

It has been talked about the importance of increasing the share of liquefied natural gas (LNG) in the global gas market in recent times, and also the importance of place and capacity of ports in LNG shipping, and the advantages of digitalization in port management have been discussed at the meeting called “Who is afraid of LNG?" And "Digitalization and Destructive Technologies – Generally."

In addition to interesting discussions, a cultural program consisting of entertaining events and interesting excursions was also organized for participants of the IAPH Baku 2018 conference.

It should be noted that during the annual conference held by the International Ports Association in Panama in 2016, the Board of Directors unanimously decided to hold the World Ports Conference in 2018 in Baku. IAPH which has headquarter in Tokyo, represents about 180 ports of 90 countries and 140 enterprises which have relations with ports. Members of the organization carry more than 60 percent of the world's sea trade and control over 80 percent of international container routes. The annual conferences of the enterprise were held in Los Angeles in 2013, Sydney in 2014, Hamburg in 2015, Panama in 2016 and Bali in 2017.